You can hear a noise as you approach the high iron gates that are the only way into the compound that is the centre of the British airlift operation out of Afghanistan.

On either side of a narrow road, inside the walls of the compound in Kabul, exhausted British soldiers lie in the shade waiting for their turn to head back outside into the burning sun and the chaos once again.

The noise is the sound of shouting, it’s the noise of desperation.

Thousands of people are flooding towards this innocuous place that will, for some, be the gateway to freedom – and for many others, the end of a dream of escaping the Taliban.

After two decades this is what it has come down to. A hasty retreat, a civilian evacuation… with the Taliban watching on.

As every day passes this relief operation gets more and more urgent and desperate, as the British military tries to move thousands of people out of Afghanistan in just days.

It’s a humanitarian mission in what feels like a war zone.

A makeshift barricade is all that separates two armies who have fought for 20 years.

The Taliban are just one metre away from the British soldiers – it’s a picture I never thought I would see.

We’ve watched as thousands converged on this base threatening to overwhelm the whole evacuation operation.

The Taliban have assisted in this. Up the road they are controlling the crowds of people trying to reach the British position.

Sometimes they fire into the air, making people stop.

They are a menacing presence.

Day and night families – often with tiny children – have risked their lives, ducking past gunfire at the gates of the civilian side of the airport; passing aggressive Taliban fighters, who occasionally beat and harass them.

In the night, the paratroopers blockaded the road with cars and razor wire.

A senior officer told me they had no choice because the situation was out of control, but said the blockade will live with some of his soldiers for the rest of their lives.

“It was terrible, women were throwing their babies over the razor wire, asking the soldiers to take them, some got caught in the wire,” he told me.

“I’m worried for my men, I’m counselling some, everyone cried last night.”

It looks like chaos but there is a method, the soldiers call out for interpreters as different nationalities arrive at the barricade, including Afghans with a valid asylum case.

Passports and paperwork are then checked.

If they pass muster they’re directed to the entry gate to be processed. Some make it, others don’t.

The soldiers hate this but without the right paperwork they have to turn people away.

Terrified families – men, women and large numbers of children – are sent back through the barbed wire.

We watched as one little girl, her parents and brothers were sent back.

Back into Afghanistan, back towards the Taliban. 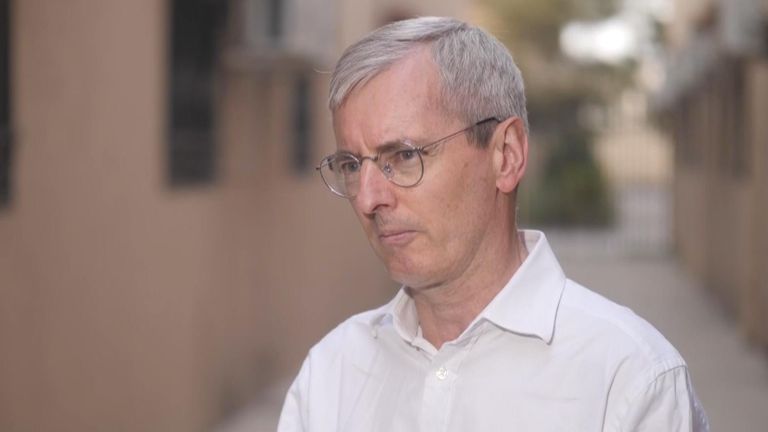 UK has ‘days’ to evacuate Britons

Fatima, not her real name, made it through the barricade clutching her daughter’s hand. She thinks she might have a case but doesn’t know who to speak to.

She is terrified, and in tears. Her husband joined the Taliban and took to beating her.

She and her four-year-old have nothing but a UN letter identifying them as victims.

“Afghanistan is Taliban. Taliban is terrorist. My husband is a terrorist Talib,” she explained to me.

She starts listing countries: “America, Canada, France, me and just my daughter…” 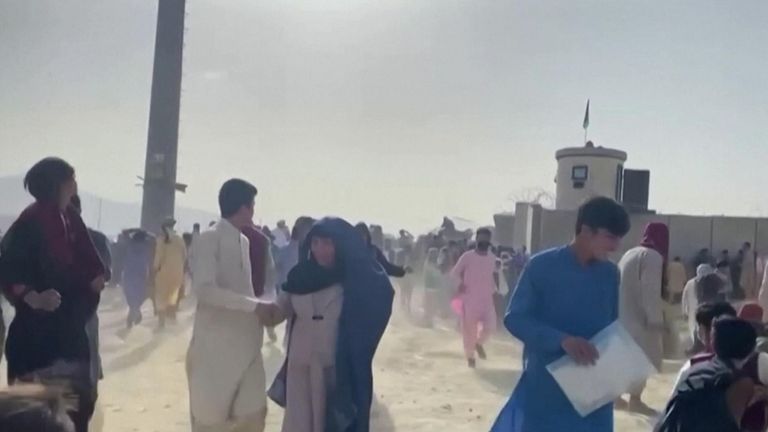 Gunshots ring out at Kabul Airport

I asked if they’ll go anywhere. “Anywhere! Any country,” she said.

We mentioned her story to the officer in charge outside.

The soldiers have a reasonable degree of latitude in their decision making, and Major Steve White decided to enter her into the system.

“I can put her into the system, but I don’t know if the system will spit her out, but I can do that at least,” he told me.

He walked over to Fatima and, through another journalist who could translate, explained to her what he was going to do. She seemed confused, but we told her to follow him.

And he took her to the queue.

It was quite simply an act of human kindness in all this mayhem.

Fatima did make it inside. Major White may well have saved their lives, he’s certainly given them a chance of a better one.

But there are many sad stories as well.

We met a doctor from Herat with her sister and her mother, and it would appear they had absolutely no rights to get through the gates.

They fled the Taliban and are now stuck.

They have hope but it seems hopeless.

“We don’t have brother, we don’t have father, you know that living in here is very difficult for us,” she told me.

She explained they were living in Herat but escaped to Kabul. Her uncle was part of the Taliban.

She said: “They want to obligate us into forced marriage. I am a doctor and my sister was working with women’s rights, she studied, and my mother is a teacher, my mother was a teacher…”

I asked if they’re running away from certain danger.

I’ve reported on the Afghan war since it started. I’ve been on countless embeds with British and American soldiers, I’ve met with the Taliban, and I’ve seen pain and grief in Afghanistan for two decades.

The Taliban has won.

Watching on as soldiers carried babies towards the gates of the compound, I can’t help but think what a waste this has been.

And once again a small contingent of soldiers are dealing with the mess.

END_OF_DOCUMENT_TOKEN_TO_BE_REPLACED

Ten members of one Afghan family were killed following a US drone strike in Ka...

END_OF_DOCUMENT_TOKEN_TO_BE_REPLACED

The last remaining UK troops have been flown out of Kabul airport, ending Brit...

END_OF_DOCUMENT_TOKEN_TO_BE_REPLACED

Afghanistan: Boris Johnson vows to ‘shift heaven and earth’ to get more people out of country after deadline with over 14,500 evacuated so far

Boris Johnson has pledged to "shift heaven and earth" to get more people out o...

END_OF_DOCUMENT_TOKEN_TO_BE_REPLACED

Afghanistan: UK’s evacuation into ‘final hours’ – with no more people to be called forward

The UK's evacuation mission at Kabul's airport has "a matter of hours" left an...