Pubs in England will be allowed to stay open longer on Sunday in case the Euro 2020 final goes into extra time and penalties, Downing Street has said.

The prime minister’s official spokesman said: “We are taking forward plans to allow pubs to open until 11.15pm on Sunday.

“The entire nation has been gripped by the Euros and this will ensure people can come together to enjoy the final in pubs, should they wish to do so.”

Meanwhile, Kensington Palace has announced that the Duke of Cambridge will attend England’s hotly-anticipated semi-final match against Denmark on Wednesday evening.

Prince William, who is president of the Football Association, will join 60,000 football fans to cheer on the Three Lions at Wembley Stadium as they look to reach their first major tournament final since 1966.

The winner will play either Spain or Italy in the final, also at Wembley, on Sunday at 8pm.

William will attend the match without the Duchess of Cambridge, who previously joined him and Prince George to watch England beat Germany in the round of 16, as she is self-isolating after coming into contact with someone with coronavirus.

He wrote on Twitter how he “can’t wait” for the England v Denmark match.

Gareth Southgate’s 26-man squad were busy preparing for the match on Tuesday with a morning training session at St George’s Park in Burton-upon-Trent.

Bukayo Saka was again with the group having recovered from a knock that saw him omitted from the squad against Ukraine as a precaution.

The team are due to travel south from Burton on Tuesday afternoon, with captain Harry Kane joining Southgate at a pre-match press conference ahead of the 8pm match on Wednesday. 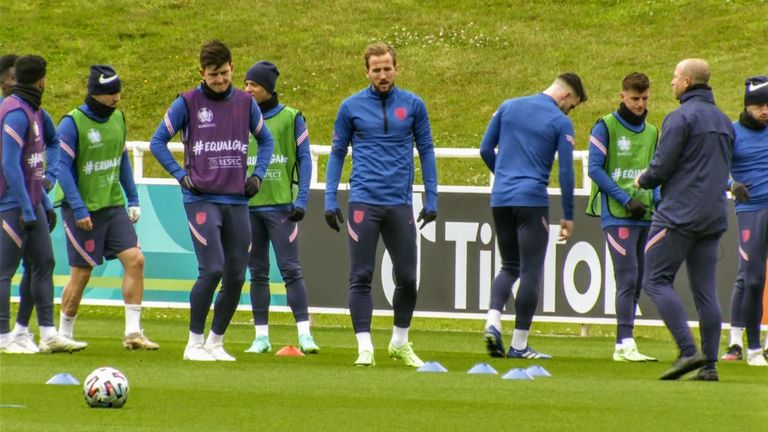 England train at St George’s Park ahead of semi

It will be the fifth time the Three Lions have played in the semi-finals of a major tournament, not including the 1968 European Championship when only four teams qualified for the finals.

The Three Lions have yet to concede a goal let alone lose at this summer’s rearranged competition and have the chance to reach a first major tournament final since the 1966 World Cup victory.

Meanwhile, excitement was building among England and Denmark fans.

Alessandra Helstrup Norreriis, 26, bagged one of 5,000 tickets made available for Danes living in the UK.

“I feel really lucky that I’ve managed to get one, but I think DBU (Danish Football Association) have been really helpful in reaching out to the Danes to let us know how to do it,” she told the PA news agency.

“I watched the Denmark game against the Czech Republic in a pub in Manchester with other Danes. As soon as I got home I started researching how to get the tickets – there was a lot of frantically refreshing my email yesterday.”

She added that the way the side had responded to Eriksen’s shock collapse in Denmark’s opening match on 12 June had made her “unbelievably proud to be Danish”.

With Denmark on the UK government’s amber list for travel, and Danes required to quarantine for 10 days on arrival in the country, fans will not be able to travel to attend the game, with the 5,000 tickets for fans in the UK providing the majority of Denmark’s support.

Prime Minister Boris Johnson has urged football fans and businesses to act “in a responsible way” as large crowds are expected to gather for the game and the following closing matches of the tournament.

He told a Downing Street news conference on Monday: “I think my advice to everybody would obviously be to support England enthusiastically but in a responsible way.

“The events at Wembley clearly have particular conditions attached to them with particular testing requirements that we will insist on.”

Downing Street parties: Wait for Sue Gray’s No 10 parties report to be published continues into another day

The wait for Sue Gray's report into lockdown parties in Downing Street and Whitehall to be published has rolled into a...

END_OF_DOCUMENT_TOKEN_TO_BE_REPLACED

The world's most powerful space telescope has reached its final stop - one million miles from Earth - a month after se...

END_OF_DOCUMENT_TOKEN_TO_BE_REPLACED

Dominic Cummings is set to be interviewed by Sue Gray on Monday as part of her investigation into alleged Downing Stre...

END_OF_DOCUMENT_TOKEN_TO_BE_REPLACED

The FTSE 100 has joined a global markets sell-off as it followed Wall Street into the red amid jitters over rate rises...

END_OF_DOCUMENT_TOKEN_TO_BE_REPLACED

Fears are growing inside 10 Downing Street that former pub landlady Sue Gray could call time on Boris Johnson in her W...

END_OF_DOCUMENT_TOKEN_TO_BE_REPLACED

Liverpool have secured their place in the Carabao Cup final with a 2-0 victory over Arsenal at the Emirates Stadiu...

END_OF_DOCUMENT_TOKEN_TO_BE_REPLACED

Number 10 has apologised to the Queen over two parties held in Downing Street on the eve of Prince Philip's funeral.Th...

END_OF_DOCUMENT_TOKEN_TO_BE_REPLACED

Britain's economy grew stronger than expected in November before the Omicron variant struck, bouncing back for the fir...

END_OF_DOCUMENT_TOKEN_TO_BE_REPLACED

A Sicilian mafia fugitive who was on the run for nearly 20 years was caught after being spotted on Google Street View....

END_OF_DOCUMENT_TOKEN_TO_BE_REPLACED

A Sicilian mafia fugitive who was on the run for nearly 20 years was caught after being spotted on Google Street View....

END_OF_DOCUMENT_TOKEN_TO_BE_REPLACED

COVID-19: Pupils in England required to wear face masks and get tested as they return to school today

School children across England will be required to wear face masks and take a lateral flow test as they start returnin...