Prince Charles has said he is “deeply conscious of the honour represented by my mother’s wish” for his “darling” wife to be known as Queen Camilla.

It comes after the long-serving monarch used the historic milestone of her Platinum Jubilee to express her “sincere wish” that the Duchess of Cornwall will be known as queen consort when the Prince of Wales is crowned king.

The royal seal of approval on the 70th anniversary of the Queen’s reign represented a significant intervention in shaping the future of the monarchy. 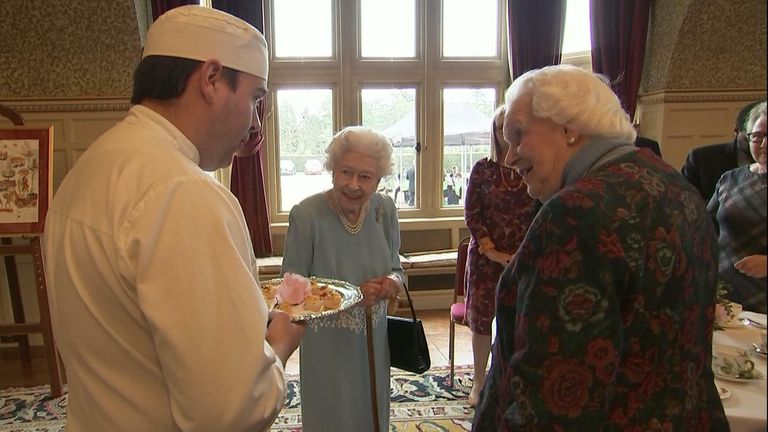 It publicly put the sovereign’s affairs in order in the twilight of her rule and ends years of controversy over Camilla’s future title.

In a statement, Charles said: “On this historic day, my wife and I join you all in congratulating Her Majesty the Queen on the remarkable achievement of serving this nation, the Realms and Commonwealth for 70 years.

“The Queen’s devotion to the welfare of all her people inspires still greater admiration with each passing year.

“We are deeply conscious of the honour represented by my mother’s wish.

More on Duchess Of Cornwall

“As we have sought together to serve and support Her Majesty and the people of our communities, my darling wife has been my own steadfast support throughout.

“The year of this unprecedented Platinum Jubilee brings an opportunity for us all to come together in celebrating the service of the Queen, by whose example we will continue to be led in the years to come.”

The start of a jubilee year can be a time to reflect, reminisce and think about what’s next, but we never expected the Queen to make her thoughts as clear as she has done in her Accession Day message.

As the world is watching at the beginning of her Platinum Jubilee year she’s issued the most ringing endorsement of her son and his wife that anyone could have imagined.

She clearly wanted to use this opportunity to thank Camilla who over the past 17 years has rolled her sleeves up, embraced the sometimes less glamorous royal engagements and in her majesty’s eyes shown herself to be a worthy future consort, in the mould of Prince Philip and the Queen Mother.

I’m told the matter of whether Camilla would be Queen is not an issue that on a weekly basis has occupied the mind of the Prince of Wales, but it has been something that he’s wanted addressed.

No one wanted Camilla’s title to be a distraction at the start of his reign.

For all her modesty the Queen realises the strength of her own words, and when one day we see a new monarch there can be no questions about what she really wanted.

When Prince Charles married Camilla in 2005, royal aides insisted that Camilla did not want to be queen and said originally the former Mrs Parker Bowles “intended” to be known instead as princess consort, the first in British history, instead.

It was seen at the time as an acknowledgment that the public was finding it difficult to accept Charles’ new wife, after their affair and his divorce from Princess Diana.

Technically, Camilla would have been Queen when Charles acceded to the throne, and only legislation would have prevented it.

But the Queen has now closed the matter in a move seen to help to make the start of her son’s reign as trouble free as possible.

Read more:
How events unfolded on the day Princess Elizabeth ascended the throne
What was the Queen doing when you were born? Find out here
Camilla: From Mrs Parker Bowles to the next queen consort

In her message to the nation to mark Accession Day, and the start of her Jubilee year, the Queen thanked people for their support during her reign.

She wrote: “I remain eternally grateful for, and humbled by, the loyalty and affection that you continue to give me.

“And when, in the fullness of time, my son Charles becomes king, I know you will give him and his wife Camilla the same support that you have given me; and it is my sincere wish that, when that time comes, Camilla will be known as queen consort as she continues her own loyal service.”

The Queen, who came to the throne when she was just 25, is spending the day privately on the Sandringham estate in remembrance of her father George VI, whose death marked the start of her reign.

It will also be the Queen’s first jubilee without Prince Philip, her beloved husband of 73 years who died last year aged 99.

The Queen’s Platinum Jubilee will be celebrated across the country during an extended June Bank Holiday.

National celebrations marking the Queen’s record-breaking service on the throne will be staged during a special four-day bank holiday weekend from June 2-5.

Regular viewers may have trouble believing their eyes when Prince Charles and the Duchess of Cornwall make a guest app...

END_OF_DOCUMENT_TOKEN_TO_BE_REPLACED

Stars from across the globe descended on the red carpet ahead of premieres for upcoming films that are set to take pla...

END_OF_DOCUMENT_TOKEN_TO_BE_REPLACED

Prince Harry has said he hopes his children "never have to experience the online world as it is right now".The Duke of...

END_OF_DOCUMENT_TOKEN_TO_BE_REPLACED

‘What she has accomplished is historic’: Praise for Queen as Platinum Jubilee celebrations begin

The Queen received a standing ovation as her Platinum Jubilee celebrations began on Sunday.A Gallop Through History wa...

END_OF_DOCUMENT_TOKEN_TO_BE_REPLACED

Dolly Parton has been inducted into the Rock & Roll Hall of Fame - despite initially resisting the honour, saying ...

END_OF_DOCUMENT_TOKEN_TO_BE_REPLACED

Two of the UK's best-known condiments are getting a royal makeover to mark the Queen's Platinum Jubilee.Heinz is relea...

END_OF_DOCUMENT_TOKEN_TO_BE_REPLACED

More than £15,000 has been donated to a fundraiser set up by Kelsey Parker, widow of The Wanted star Tom Parker.Mrs Pa...

END_OF_DOCUMENT_TOKEN_TO_BE_REPLACED

The Duke and Duchess of Cambridge have arrived in Belize as demonstrations over land rights forced them to cancel thei...

END_OF_DOCUMENT_TOKEN_TO_BE_REPLACED

What a week it's been for the Royal Family and what a start to the Queen's Platinum Jubilee year.In the past ten days ...

END_OF_DOCUMENT_TOKEN_TO_BE_REPLACED

Hailed as the "undisputed Queen of the Brits", Adele marked her big return to the UK with a successful night at the ce...

END_OF_DOCUMENT_TOKEN_TO_BE_REPLACED

Prince Andrew has demanded a trial by jury as he officially responded to Virginia Giuffre's sexual assault civil lawsu...