Engineers warned about structural damage in a Miami apartment block three years before its collapse, it has emerged.

The Champlain Towers South building in Surfside collapsed on Thursday, killing four people and prompting a search and rescue operation for the 159 people missing.

And concern about building safety has prompted an audit, which will take place within the next 30 days of nearby buildings approaching their 40-year review.

The collapsed building had been preparing for its recertification this year, having been built in 1981.

But a building further down the street, built by the same developer at around the same time, is likely to be looked at closely and could soon be evacuated.

Florida governor Ron DeSantis said: “I know they’re looking at… working with them and I know they’re considering potentially evacuating them, but that’s something that ultimately the mayor is going to have to make the call on.

“I don’t know that there are indications there are any problems with that building but just given the similarities, given the same age, they think that may be something, so I think they may have an announcement on that today.”

The engineering report about the 12-storey Champlain Towers South, by Morabito Consultants in 2018, said waterproofing under the pool deck had failed, having been incorrectly laid flat instead of sloped, preventing water from draining away.

It warned that the failed waterproofing was “causing major structural damage” to the concrete slabs below.

When asked about it on Saturday, Miami-Dade mayor Daniella Levine Cava said: “We did not know about this report.”

The report did not warn of imminent danger and it is not clear if the damage was a factor in the collapse, but it recommended that the damaged slabs be replaced in what was expected to be an “extremely expensive” repair.

“Failure to replace the waterproofing in the near future will cause the extent of the concrete deterioration to expand exponentially,” the report said.

The report also said there was “abundant cracking” in concrete columns, beams and walls in the parking garage, including areas under the pool with “exposed deteriorating rebar”.

It criticised the standard of some previous repair efforts, saying they were marred by poor workmanship and “new cracks were radiating from the originally repaired cracks” under the pool deck.

It said some of the damage was minor but most of it “needs to be repaired in a timely fashion”.

The 84-page report was submitted to the town in April and it detailed a 40-year repair and restoration plan for the apartment building,

Satellite data from the 1990s has also showed the building was sinking between one and three millimetres each year, despite surrounding buildings remaining stable. 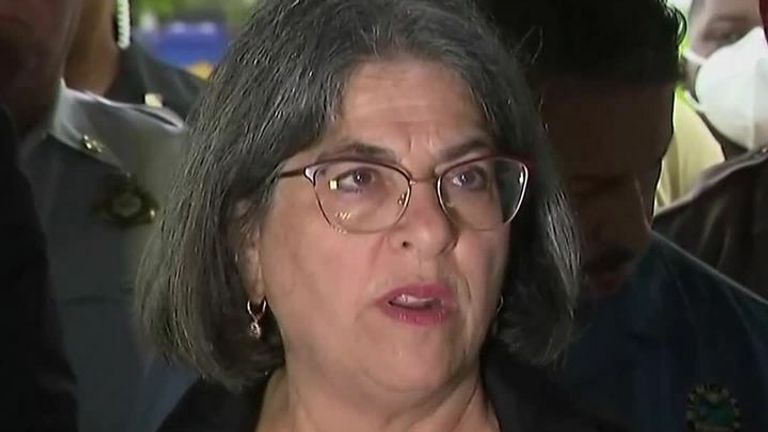 Mayor of Miami-Dade County: Rescue attempt being hampered by fire

Florida International University professor Shimon Wdowinski said this could mean a structural compromise within the building, but it could also have indicated that the building was settling into the soil.

No more survivors have been found in the rubble of the collapsed apartment block, it was announced on Saturday.

Ms Cava said the search and rescue operation was continuing but a fire within the wreckage is making the work difficult.

“It’s extremely difficult to locate the source of the fire.”

Tags:
block, building, collapsed, damage, evacuated, Miami, report, sister, structural, warned, years
Newer Matt Hancock resigns: Why high-flying former health secretary had no safety net to save him when he fell
Back to list
Older £500m of drugs including cannabis and heroin burned by Myanmar authorities

An FBI report has concluded Alec Baldwin pulled the trigger of the gun that killed a cinematographer on the Rust film ...

END_OF_DOCUMENT_TOKEN_TO_BE_REPLACED

Prosecutors in Spain are seeking an eight-year and two month prison term for Shakira, if she is convicted in a trial f...

END_OF_DOCUMENT_TOKEN_TO_BE_REPLACED

Skeleton of giant T rex ancestor sells for $6.1m – 76 million years after it roamed the earth

The fossilized skeleton of a T rex relative called the Gorgosaurus that roamed the earth 10 million years before its d...

END_OF_DOCUMENT_TOKEN_TO_BE_REPLACED

ENGLAND’S Lionesses aim to get the nation roaring tomorrow. Striker Fran Kirby said: “Hopefully we are giving the country something ...

END_OF_DOCUMENT_TOKEN_TO_BE_REPLACED

A housing group said it is "devastated" and "sorry for our part" in failing to realise one of its tenants had been lef...

END_OF_DOCUMENT_TOKEN_TO_BE_REPLACED

Claire Foy's stalker has been ordered to stay away from her for five years, following a court hearing on Friday.Jason ...

END_OF_DOCUMENT_TOKEN_TO_BE_REPLACED

It was unfair to blame Liverpool fans for unrest in Paris before the Champions League final as state authorities faile...

END_OF_DOCUMENT_TOKEN_TO_BE_REPLACED

Derek Chauvin has been given a 21-year jail sentence for violating George Floyd's civil rights.Chauvin will serve the ...

END_OF_DOCUMENT_TOKEN_TO_BE_REPLACED

LUIS SUAREZ put Premier League clubs on red alert as his River Plate move collapsed. The free-agent striker, 35, is said to be inter...

END_OF_DOCUMENT_TOKEN_TO_BE_REPLACED

The public has been warned by police not to approach a man who escaped custody while in hospital.Curtis Alldis, 30, wa...

END_OF_DOCUMENT_TOKEN_TO_BE_REPLACED

"Dirty money" from Russia is still flowing into the UK despite the war in Ukraine, MPs have warned. The House of Commo...