Knocking the concrete with his hand, a volunteer security officer said he believed the walls in the basement of a tower block in Kyiv were solid enough to absorb the impact of a missile.

Hennadiy Levitas said he and a group of colleagues, who voluntarily help to provide security for a group of 15 high-rise apartments on the eastern side of the capital, had a plan in place to alert all residents should their city come under a Russian attack.

Using social media and a fire alarm system, they would be able to alert the 10,000 residents in their complex to any danger and – if necessary – could guide them into the basement of their respective buildings for emergency shelter.

Asked whether he thought Russia would invade and would target the capital, Mr Levitas said: “Yes… It could happen in a few hours, a future night, a future week. We don’t know but we are ready.”

Kyiv’s 2.8 million residents have little choice other than to prepare in case warnings by the United States that their city could be targeted in a Russian attack prove correct.

For Mr Levitas that has meant buying new generators, fuel and even a water tank in the past three weeks so residents are able to be self-sufficient if power and water supplies are impacted.

Asked why he thought an invasion was inevitable, he said: “Because Russia has concentrated a lot of troops around us, and there are signals from our partners, the United States and the United Kingdom, that according to their intelligence, there is information that it is preparing an attack and possibly [to] occupy our country.

“We can’t ignore this and pretend that nothing is happening.”

He showed Sky News around one of the basement-turned-makeshift bomb shelters, which was down a short flight of stairs on the outside of one of the apartment blocks.

It was just a basement area, with thick, grey, concrete walls.

There was a main area where people could stay and a couple of other compartments.

One was a room that stores water pumps for the building and another that was used for the heating systems.

A few hundred people could probably cram inside the whole area if necessary but it might not be able to accommodate all residents. 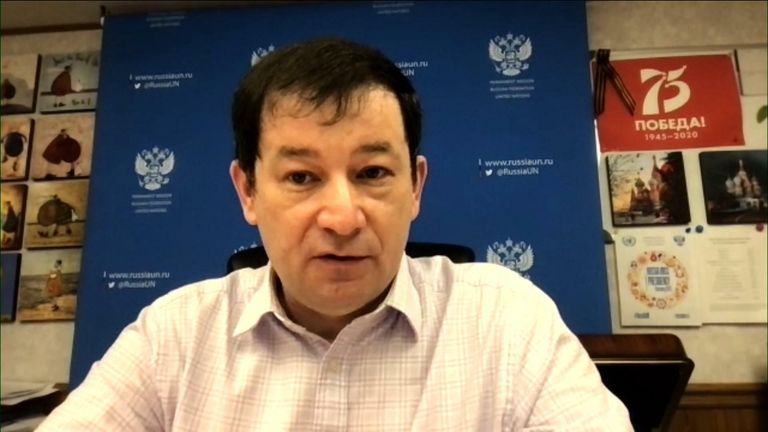 
Dmitry Polyanskiy, deputy Russian ambassador to the UN, claims US and UK intelligence on the threat of an attack on Ukraine cannot be trusted

It is very unlikely that any Russian attack would deliberately hit residential areas but Mr Levitas said that mistakes could happen.

“We do not think that our residential complex can be a target, but according to the technique and skills of our enemies we do not exclude that they may make a mistake and enter residential buildings,” he said, speaking largely in Ukrainian through a translator.

He also noted that a state-owned water facility was nearby, which provides water to about half of Kyiv.

“It is a strategic facility. It is possible that if they attack it, they may get to us too,” he said.

A father and son have been charged with fraud over an alleged $100m stock market scam that tried to massively inflate ...

END_OF_DOCUMENT_TOKEN_TO_BE_REPLACED

Heavy rainfall in Spain has caused flooding strong enough to wash away cars, with emergency services inundated with ca...