Ukraine crisis: US announces sanctions against Russia and moves hundreds of troops to protect NATO allies

Joe Biden has announced the first wave of US sanctions against Russia in retaliation for Moscow’s actions in Ukraine.

The US president said the penalties would be slapped on Russian banks, oligarchs and the country’s sovereign debt.

He told reporters that Russian troops being ordered to eastern Ukraine after Vladimir Putin recognised the independence of two separatist regions marked the “beginning of an invasion”.

Mr Biden said his Russian counterpart was “setting up a rationale to take more territory by force” and he warned that Moscow would “pay an even steeper price if it continues its aggression”.

The US commander-in-chief also said he had authorised the movement of additional forces and equipment to bolster NATO allies Estonia, Latvia and Lithuania.

Mr Biden said: “I’m going to begin to impose sanctions in response, far beyond the steps we and our allies and partners implemented in 2014.” 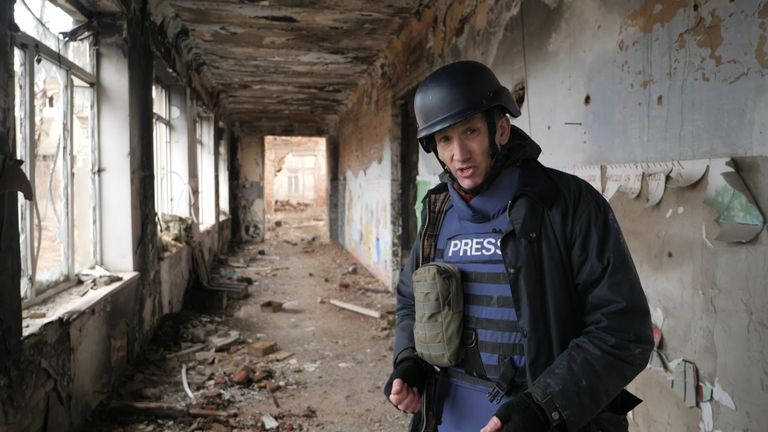 
On the frontline in Donbas

Read more: How do Russia and Ukraine military’s compare?

The sanctions are also being applied to Russia’s sovereign debt.

“We have cut off Russia’s government from Western financing. It can no longer raise money from the West,” he told reporters at the White House.

He said they were just the “first tranche” of what the US and its allies were ready to put in place if Russia launches a larger invasion, with around 150,000 Russian troops massed on Ukraine’s borders.

Mr Biden also said that from Wednesday he would impose sanctions on Russian oligarchs and their families.

Read more: How strong is NATO’s position in eastern Europe?

Meanwhile, an infantry battalion taskforce of 800 US personnel will head to the Baltic region from Italy.

“We will defend every inch of NATO territory,” Mr Biden said, adding: “We have no intention of fighting Russia.” 
‘Putin’s plan all along was to invade Ukraine’

US secretary of state Antony Blinken said America and its allies would continue to escalate sanctions if Russia continued its aggression towards Ukraine.

He told reporters: “Putin’s plan all along has been to invade Ukraine.”

America’s top diplomat said: “Now that we see the invasion is beginning and Russia has made clear its wholesale rejection of diplomacy, it does not make sense to go forward with that meeting at this time.”

The most arresting line in President Biden’s address was directed pointedly at the man who has caused all this.

“Who in Lord’s name,” Mr Biden asked, “does Putin think gives him the right to declare new so-called countries on territory that belong to his neighbours?”

The window to diplomacy, President Biden said, was still open but the rhetoric from the White House has, understandably, hardened in light of Russia’s actions over the past 24 hours.

He called Russia’s sending of so-called “peacekeeping” troops into rebel-held areas of Ukraine as the “beginning of invasion”.

As such, President Biden said the US would be imposing the “beginning of sanctions”.

The Biden administrations tactic here is deploying sanctions in waves, to leave the US with somewhere to graduate to, leaving more severe sanctions in their back pocket should Russia launch a full-scale invasion.

Read more: Who are the key players in the Ukraine crisis?

In a fast-moving crisis, Russian legislators earlier gave President Putin permission to use armed forces abroad, with the move a possible sign towards a broader attack on Ukraine.

Moscow recognised on Monday the independence of separatist Donetsk and Luhansk regions in eastern Ukraine, where government troops have fought Russia-backed rebels.

The Kremlin raised the stakes further on Tuesday, by saying that recognition extends to the large parts held by Ukrainian forces.

Mr Putin has laid out three conditions to end the crisis. He called for international recognition of Crimea as part of Russia, an end to Ukraine’s NATO membership bid and a halt to weapons shipments to the country.

The West condemned Crimea’s 2014 annexation as a violation of international law and has rejected permanently barring Ukraine from joining NATO.

The prime minister told the House of Commons it was the “first tranche” and “first barrage” of measures.

The EU also issued sanctions aimed at 351 Russian politicians who voted to recognise the breakaway regions, as well as 27 other Russian officials and institutions from defence and banking.

They also sought to limit Moscow’s access to EU capital and financial markets.

Former Oasis guitarist Paul Arthurs - better known as Bonehead - has announced that he has been given the "all clear" ...

END_OF_DOCUMENT_TOKEN_TO_BE_REPLACED

Cost of living crisis: Britons on £45,000 will need help paying energy bills – not just those on benefits, chancellor says

Britons on £45,000 salaries will need government help to pay their energy bills - not just people on benefits, the cha...