Shuffling down the street with a neighbour, 78-year-old Natalia recalled her encounter with Russian troops who took control of her town, Bucha, outside Kyiv.

They broke into her home, smashed a window and then one soldier threatened to shoot her.

“I said: ‘OK, shoot me, if that’s why your mother gave birth to you, you must kill me as your second mother,'” she said about what must have been a terrifying ordeal. 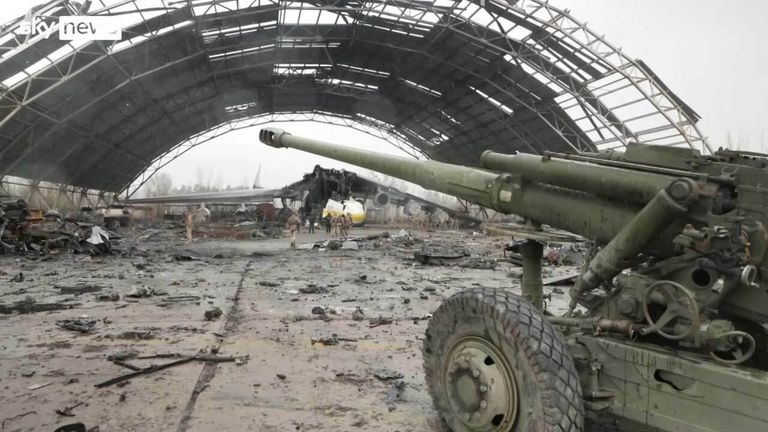 “He told me again to leave the basement and I said no. I said that if you have to shoot, shoot me first. And then they started running around the building like cockroaches.”

She said they destroyed her car as well as local shops and a pharmacy.

“They thought that our people will be happy to see them here, but it was more like brother against brother,” Natalia said.

Her husband is Russian, she is Ukrainian. They have been together for 43 years.

“Can you imagine brother fighting brother?”‘ she asked, the words spilling out of her in one continuous stream.

“The Russian solider said that we started it first. When? Why? Did I break the windows of your mother’s house?

“Ultimately it’s terrible what we witnessed here, that brother could fight brother. We are in a deep shock.”

The world is also shocked by the horrors that have been uncovered in Bucha after Russian forces pulled out a few days ago.

In fact, Russian troops have withdrawn from the whole Kyiv region, though there are fears they are just regrouping and could attack again.

In their wake is evidence of mass graves, torture and broken bodies of residents lying in the streets.

It is hard to imagine, but Bucha, about 16 miles outside Kyiv, was a popular commuter town.

Young couples chose to move here, where property is more affordable, to start a family.

The town centre is lined with shops. There are schools, nurseries and parks.

Then Russian forces, heading for the capital, tried to push through Bucha, turning the town into a battleground.

It was here that Ukrainian forces managed to help slow and then halt the Russian advance towards Kyiv.

The Ukrainians bombed a key bridge, stopping Russian fighting vehicles from being able easily to pass.

They smashed the Russian side with artillery.

The bridge, collapsed in the middle, has a line of twisted metal on one end – the remains of the Russian vehicles. Next to them are the charred bodies of at least six Russian soldiers.

More battles raged around this region to the northwest of the capital.

One of the fiercest was for control of a nearby airport, Hostomel. It was a key Russian target on day one of the invasion.

They wanted to use the large airfield to be able to fly in reinforcements for their push on the capital.

But that never happened. Instead the area has been the scene of fierce fighting ever since.

Until a couple of days ago when Russian troops withdrew.

It is an important victory for Ukraine’s military, but no one thinks it’s over yet.

Colonel General Oleksandr Syrskyi is Commander of the Ground Forces of the Armed Forces of Ukraine and also commands the defence of Kyiv.

Asked how he felt about the Russian withdrawal from Hostomel, he signalled there would be more fighting ahead.

“I know a lot of struggles before and … after. We have to prepare for future struggles,” he said.

Everywhere you look at Hostomel is evidence of the battle that raged between the two sides before the Russian side was beaten back.

Bullet casing and shells litter the floor. There are wrecked Russian vehicles and an abandoned Russian gun.

On the front page was a picture of Russian President Vladimir Putin, with a headline quoting him as praising the courage of his troops.

Ukraine’s defence minister visited the site on Saturday morning to pay tribute to the courage and bravery of his forces who triumphed here, handing them hand pistols and special knives.

Describing the significance of the victory here, Oleksii Reznikov told Sky News: “I think it is important for our soldiers who deterred the aggressor and kicked them out of Hostomel.”

Asked if he thought Russian forces had merely pulled out to regroup and would attack again, he said: “It depends on the mind of the chairman of the Kremlin. We will see.”

END_OF_DOCUMENT_TOKEN_TO_BE_REPLACED

Mass pitch invasions at two football grounds led to "physical and verbal" abuse as well as an altercation between a ma...

END_OF_DOCUMENT_TOKEN_TO_BE_REPLACED

French actor Gerard Depardieu, who has praised Vladimir Putin in the past, has now condemned the Russian President's "...

END_OF_DOCUMENT_TOKEN_TO_BE_REPLACED

Russian government hackers have been linked to an attack on a satellite communications company at the start of the inv...