Nestle has announced it is pulling popular brands including KitKat chocolate bars and Nesquik out of Russia due to its invasion of Ukraine, but will still sell essential foods in the country.

The Swiss food giant was criticised by Ukrainian president Volodymyr Zelenskyy for not following other Western companies in suspending operations in Russia.

However, the company faced a backlash for not going far enough and so has now suspended sales of brands such as KitKat and Nesquik. 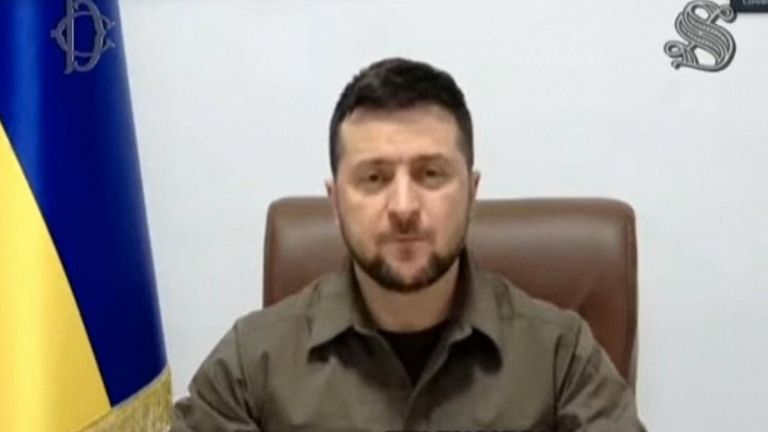 
Ukraine on ‘brink of survival’

The products affected, which also include pet food and coffee, make up the “vast majority of volume and sales” in Russia, which totalled 1.7 billion Swiss francs (£1.38bn) in 2021, a company spokesperson said.

Nestle said in a statement: “As the war rages in Ukraine, our activities in Russia will focus on providing essential food – not on making a profit.

“We are fully complying with all international sanctions on Russia.”

It comes after Mr Zelenskyy hit out at Nestle in a streamed speech to protesters in Switzerland on Saturday.

He said: “‘Good food. Good life.’ This is the slogan of Nestlé. Your company that refuses to leave Russia.

“Even now – when there are threats from Russia to other European countries. Not only to us. When there is even nuclear blackmail from Russia.”

• A US defence official has told Reuters that Russia’s combat power in Ukraine has declined below 90% of its pre-invasion levels for the first time since the war began, suggesting heavy losses
• A ceasefire is in force in the Luhansk region in eastern Ukraine – where Russian-backed separatists are in control – to evacuate civilians trapped by fighting, the local governor says
• The United Nations says it has recorded 953 civilian deaths and 1,557 injuries among Ukrainians, while millions of people have fled their homes
• ‘Most frightening thing is the world will forget Mariupol’: Those fleeing tell their stories

Ukrainian Prime Minister Denys Shmyhal had said on Twitter that Nestle boss Mark Schneider was “showing no understanding” of the severity of continuing to conduct business in Russia.

He said: “Paying taxes to the budget of a terrorist country means killing defenceless children and mothers. Hope that Nestle will change its mind soon.”

Talked to @Nestle CEO Mr. Mark Schneider about the side effect of staying in Russian market. Unfortunately, he shows no understanding. Paying taxes to the budget of a terrorist country means killing defenseless children&mothers. Hope that Nestle will change its mind soon.

His words also resulted in #BoycottNestle trending on Twitter.

Earlier this month, Nestle said it had stopped stopped shipments of non-essential products such as Nespresso coffee capsules and San Pellegrino water.

However, it still sold many of its other products.

It said it would continue to pay its 7,000 workers in Russia, where it has six factories that make products including ready meals, beverages and pet food.

Nestle said: “We have a responsibility toward our more than 7,000 employees in Russia – most of whom are locals.

“While we do not expect to make a profit in the country or pay any related taxes for the foreseeable future in Russia, any profit will be donated to humanitarian relief organisations.

“We stand with the people of Ukraine and our 5,800 employees there.”

The latest move will mean Nestle will only be selling infant food, and medical and hospital nutrition.

Other international brands including McDonald’s, L’Oreal, H&M and Apple have also suspended or limited their operations in Russia.

END_OF_DOCUMENT_TOKEN_TO_BE_REPLACED

Liz Truss, the Conservative leadership frontrunner, has been criticised after accusing the civil service of having a "...

END_OF_DOCUMENT_TOKEN_TO_BE_REPLACED

Elon Musk has sold $6.9bn (£5.7bn) of shares in his electric vehicle maker Tesla as his battle against Twitter continu...

END_OF_DOCUMENT_TOKEN_TO_BE_REPLACED

MANCHESTER UNITED transfer target Fabian Ruiz has refused to sign a new contract with Napoli, according to reports. The Red Devils h...

END_OF_DOCUMENT_TOKEN_TO_BE_REPLACED

Ukraine: Putin-bashing Russian journalist has no regrets despite facing hostility from all sides

It's been a hard couple of months for Marina Ovsyannikova, the Russian state TV journalist who burst onto an evening n...

END_OF_DOCUMENT_TOKEN_TO_BE_REPLACED

Buzz Aldrin’s 1969 moon jacket becomes most valuable US artefact at auction after selling for £2.3m

The jacket worn by Buzz Aldrin on his first mission to the moon in 1969 has been sold for more than £2 million - becom...

END_OF_DOCUMENT_TOKEN_TO_BE_REPLACED

British singer-songwriter Ellie Goulding has revealed she travelled to Ukraine as a guest of President Volodymyr Zelen...